Please pass a blunt at my funeral... def something i'll keep in mind when my days start coming to and end. Or maybe i'll tell everyone to roll my ashes up and smoke them like they did for Tupac lol.

Like, reblog, pass along or w/e else you do if you would like someone to pass a blunt when you expire... 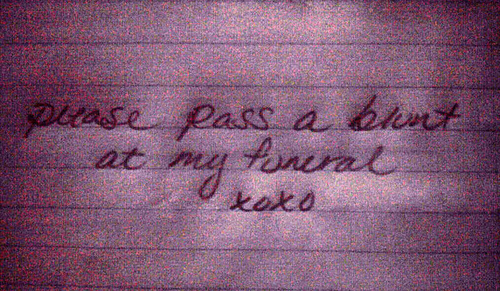 Map Proves You Are Paying Too Much For Marijuana 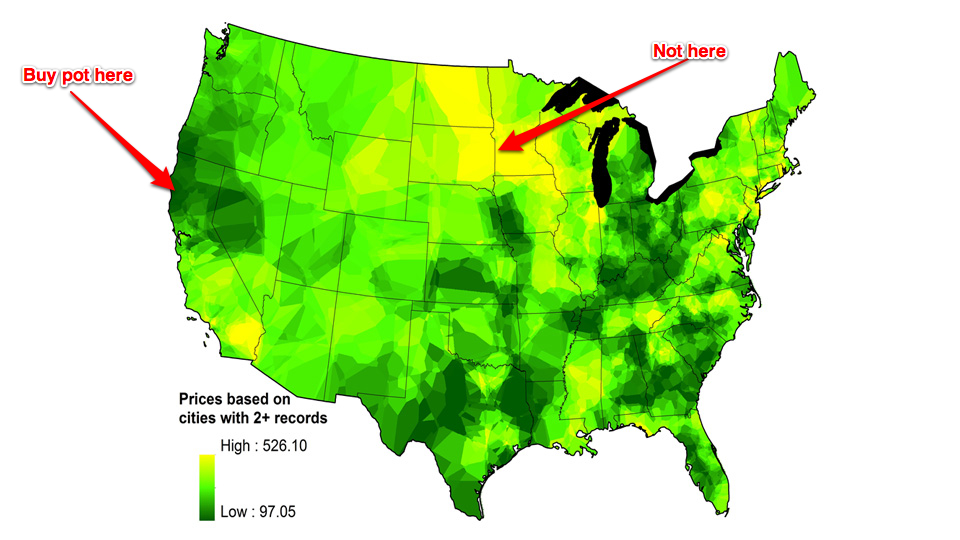 The September issue of Wired has a nationwide map of marijuana prices (excluding Alaska and Hawaii, where people apparently don't smoke weed.) It's fascinating to see the price differences nationwide, but there are interesting economic points as well.
The map was put together by FloatingSheep, a group that maps and analyzes location-specific data. In this case, it took data from the Price of Weed website, which crowd-sources marijuana prices. As Floating Sheep explains, using that data it was pretty easy to create a weed price map:
After cleaning the data to get rid of the outliers, we created a continuous surface using a statistical interpolation technique known as kriging to identify the average variance among price differences through a spherical semivariogram model. To obtain a price for each location show in the map above, an interpolated value was estimated as a weighted average of prices from its twelve neighboring points.
Gah! Wait, did I say easy? I meant complicated. But either way, the results are kind of amazing. And looking closely, you can actually learn something from them.
(Source) http://gizmodo.com
Comments

Marijuana decriminalized, but pot on campus is still a risk 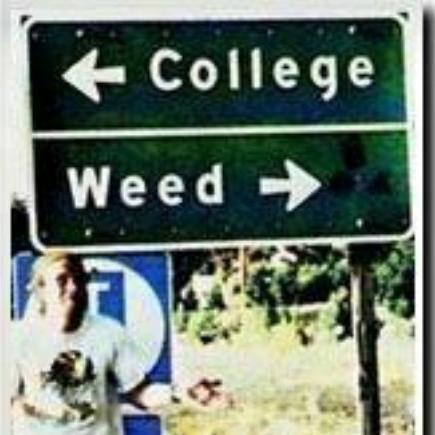 Colleges want to play the "we are above the law" game and continue to scew with students over something that is less harmful than alcohol which they openly allow students to drink.
After the decriminalization of marijuana this summer, students at the state's four-year colleges face more lenient sanctions under the law if caught with a small amount pot, but they can expect unchanging disciplinary standards on campus.
The University of Connecticut and the Connecticut State University System will not change their judicial proceedings or possible sanctions for students caught with marijuana, even though state law made less than half an ounce a low-level offense starting July 1.
"It's still illegal," said Bernard Kavaler, the assistant vice chancellor for public affairs at the state university system.
UConn will continue to evaluate marijuana use based on its Student Code and Office of Community Standards, which was not changed to reflect the lessened criminal penalties, UConn spokesman Michael Kirk said.
According to the Student Code, possible sanctions for the possession or use of illegal drugs can result in university suspension. Kirk said suspension is not always the case, however. Community Standards evaluates each violation of the Student Code on a case-by-case basis.
"A number of different factors are considered, including whether or not a student was cooperative, the student's knowledge and forethought involved in committing the violations; the student's prior conduct history UConn; whether there were multiple violations that create a cumulative effect; and the severity of the violation, among other things," Kirk said in an e-mail. "So there is no one-size-fits-all sanction."
Many colleges and universities follow their own administrative processes, not modeled after the typical criminal/court process, in determining student violations and subsequent disciplinary action. UConn, for example, doesn't factor a student's criminal behavior into their administrative processes when evaluating a student violation. UConn's Community Standards website for frequently asked questions about the Student Code reads, "The criminal process focuses on violations of the law. The University's process focuses on violations of the University of Connecticut's community standards."
UConn's community standards stipulate that illegal drugs aren't permitted on campus. Students also can't consume alcohol on campus except in licensed premises, even if they are 21 or older. A student caught with less than half an ounce of marijuana will get away without a criminal record, but the university may add the violation to the student's academic record.
(Source) http://www.ctmirror.org
Comments

One of the cooler pipes we have come across recently. 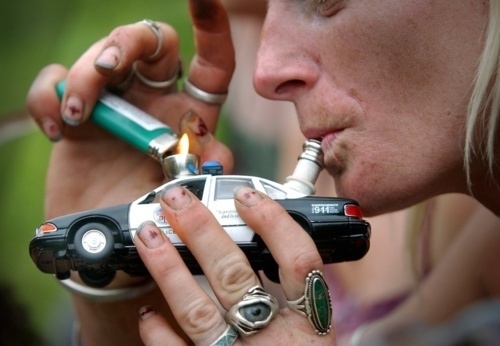 Be creative when getting high in public

Just one of the many ways to get high while you are hitting up the club scene or having a wild night out. 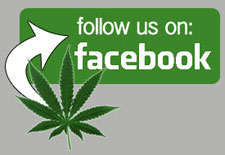 So apparently this new "study" is claiming that the more you use social networks such as facebook and others, the more likely you are to use drugs.... what a joke!

Teens who use Facebook and other social networking sites on a daily basis are three times as likely to drink alcohol, twice as likely to use marijuana, and five times more likely to smoke tobacco than teens who don't frequent the sites.
"The findings in this year's survey should strike Facebook fear into the hearts of parents of young children and drive home the need for parents to give their children the will and skill to keep their heads above the water of the corrupting cultural currents their children must navigate," study author Joseph A. Califano, Jr., founder and chairman of Columbia University's National Center on Addiction and Substance abuse, said in a written statement.
Seventy percent of teens spend time on these sites every day, according to the survey. That's 17 million 12- to 17- year-olds.
According to Califano, looking at pictures of teens getting drunk, using drugs, and passing out contributes to this risky behavior. Compared to teens who never saw these images on social networking sites, picture viewers where three times more likely to drink alcohol, four times more likely to smoke pot, and three to four times more able to obtain marijuana and illegal prescription drugs.
"Continuing to provide the electronic vehicle for transmitting such images constitutes electronic child abuse," according to Califano.
The study also looked at how television contributes to teen's risky habits.
Not surprisingly, watching Snooki and the gang get sauced week-after-week may be affecting teen viewers. The survey found one-third watch shows like "Jersey Shore," "Teen Mom," and teen dramas like "Gossip Girl." Compared to teens that don't watch this suggestive programming, these 12- to 17-year-olds are almost twice as likely to drink and use marijuana.
"They see these images and there are no moral or educational statements accompanying them, so teens may be left with the impression that this is what the real world is about and that everybody is doing it, so it is OK," Dr. Andres Huberman, medical director at North Shore Long Island Jewish Hospitals' project outreach in West Hempstead, N.Y., told WebMD.
Should parents curb their kids social networking use? If the survey results are any indication, they haven't been. Nearly 90 percent of parents surveyed as part of the study said they didn't think social networking sites would make their kids more likely to drink or do drugs.
Califano told WebMD, "It is a phenomenal assault on public health that we subject teens to pictures of drugs, alcohol, or teens being drunk or passed out on the Internet, in films, and on TV shows that are suggestive and glorify drinking and drugging."
Do you agree?
(Source) http://www.cbsnews.com
Comments