Warning: date(): It is not safe to rely on the system's timezone settings. You are *required* to use the date.timezone setting or the date_default_timezone_set() function. In case you used any of those methods and you are still getting this warning, you most likely misspelled the timezone identifier. We selected the timezone 'UTC' for now, but please set date.timezone to select your timezone. in /home/thcfinder.com/public_html/includes/functions.php on line 98
 Dutch court ruling clears way for "weed pass" | Culture THC Finder 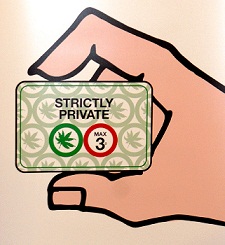 (Reuters) - The Netherlands, long famous for its liberal soft drugs policies, moved closer to introducing "weed passes" to curb sales of cannabis to foreign tourists, following a court ruling Wednesday.
Dutch coffee shops openly sell cannabis to customers, making them popular with foreign tourists, but they have faced tighter controls over the past three years as successive governments promised to discourage the use and sale of soft drugs on health and crime grounds.
The current government wants to curb drug tourism, particularly in border towns, and has proposed turning coffee shops into membership clubs which are only open to Dutch residents, in order to prevent drug sales to foreigners.
Many of the coffee shops in Amsterdam and other parts of the country have opposed the plan, saying it is discriminatory and will hit the tourism industry.
But a ruling by the Council of State, the Netherlands' highest judicial body, Wednesday strengthened the government's hand.
The court ruled that local authorities could not regulate the sale of soft drugs by banning foreigners from local coffee shops, following complaints about noise and traffic nuisance, but it added that such a ban could be introduced at national level and would not contravene European laws.
The ruling follows a protracted dispute between a coffeeshop in the border town of Maastricht and the local authorities. The coffeeshop, owned by Marc Josemans, was ordered to close temporarily because it had admitted foreigners.
(Source) http://www.reuters.com
Comments