Warning: date(): It is not safe to rely on the system's timezone settings. You are *required* to use the date.timezone setting or the date_default_timezone_set() function. In case you used any of those methods and you are still getting this warning, you most likely misspelled the timezone identifier. We selected the timezone 'UTC' for now, but please set date.timezone to select your timezone. in /home/thcfinder.com/public_html/includes/functions.php on line 98
 Debunking The "Marijuana Is A Gateway Drug" Theory | Culture THC Finder

Debunking The "Marijuana Is A Gateway Drug" Theory 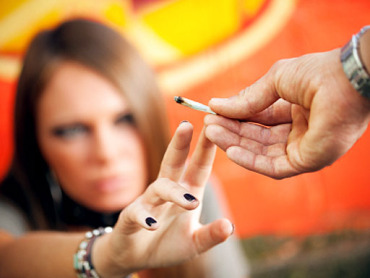 Yesterday I was a presenter at the Better People Educational Forum in Downtown Portland.  This was held in the Multnomah County Public Defender’s Office and asked the question “Marijuana: Should it be Legal?”  I made my presentation for the YES side of the case which you can view on my RadicalRuss YouTube channel and which you can download , complete with script, from 420RADIO.org.
Speaking for the NO side of the case was Sgt. Chris Kenagy from the Portland Police Bureau.  He is in charge of the Drug & Vice Task Force.  In addition to claiming alcohol prohibition didn’t work because there were simply too many people who like to drink, but “we can stop them from getting marijuana”, Sgt. Kenagy said regarding marijuana prohibition, “I think it’s worth it,” and since only 7.3% of the population uses cannabis, “why should we care?”
But what I want to spend time on today is helping Sgt. Kenagy understand that his most cherished reefer madness is utter bullshit.  Sgt. Kenagy opened up his presentation by stating that the number one reason he was opposed to marijuana legalization was because cannabis is a “gateway drug”.  He even went so far as to say that “every single study has proven it is a gateway drug”.  He then went on to talk about all the heroin, cocaine, and meth addicts he ever had to work with and “100 percent of them started with pot.”  As Sgt. Kenagy explained it, “when you first start using marijuana, you get a high, but after a while you develop a tolerance, and so you begin looking for other ways to get a stronger high.”  He also explained that “using marijuana lowers your inhibitions for using other drugs.”
It’s easy to understand why a drug and vice cop might sincerely believe marijuana leads to hard drugs, in the same way that an emergency room doctor might believe drinking inexorably leads to auto crash trauma.  It’s because of what’s called “selection bias”, the fact that all the drug users a cop meets or drinkers an ER doc meets are there because of their victim’s problems with drugs and alcohol.  Sgt. Kenagy never interfaces with the vast majority of cannabis consumers who are neither hard drug users nor have gotten caught with pot.
What Sgt. Kenagy and the “gateway drug” believers are also suffering from is retroactively attributing causality where none exists.  If you ask a heroin user what’s the first drug she tried, she will probably say “marijuana”.  (Unless she’s smart enough to recall that cigarettes and alcohol are drugs, since more heroin addicts will cite those as their first substances when properly asked.)  That doesn’t mean marijuana led the woman to heroin, it just means that heroin users tend to have used marijuana.
Read more: http://www.theweedblog.com
Comments