Warning: date(): It is not safe to rely on the system's timezone settings. You are *required* to use the date.timezone setting or the date_default_timezone_set() function. In case you used any of those methods and you are still getting this warning, you most likely misspelled the timezone identifier. We selected the timezone 'UTC' for now, but please set date.timezone to select your timezone. in /home/thcfinder.com/public_html/includes/functions.php on line 98
 San Bernardino authorities raid dispensaries | Dispensaries Marijuana THC Finder

Category: Dispensaries | Posted on Fri, May, 10th 2013 by THCFinder 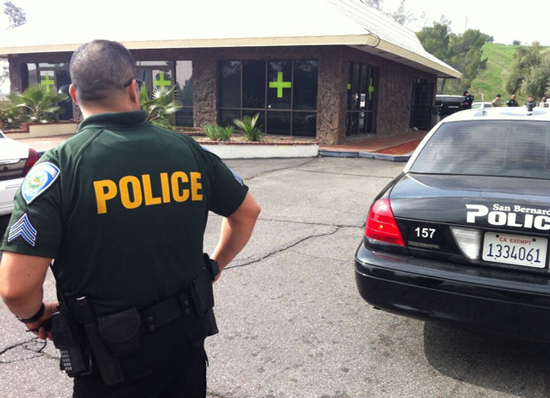 The San Bernardino city attorney and police raided a marijuana dispensary in the 3200 block of North E Street in the first of several sweeps aiming to shut down remaining store fronts in the city.
With the pungent smell of marijuana wafting along the street, an undercover narcotic task force and city attorney investigators shut down the e Street Collective and arrested four people on misdemeanor citations of operating a marijuana business, City Attorney Jim Penman said.
Its only signage are two green crosses on the windows and a backward, faded sign, “Pro Wrestling School.”
The two co-owners and two volunteers were handcuffed and declined to comment to reporters.
Inside the store, police seized 30 pounds of marijuana, including 80 growing plants. Police also found a loaded 12-gauge shotgun and more than $9,000 cash, Penman said.
Each person arrested was expected to be cited and released with an order to return to court next months.
Several patients stood outside the storefront shouting at police, but declined to comment or give their names.
Read more: http://blog.pe.com
Comments