Warning: date(): It is not safe to rely on the system's timezone settings. You are *required* to use the date.timezone setting or the date_default_timezone_set() function. In case you used any of those methods and you are still getting this warning, you most likely misspelled the timezone identifier. We selected the timezone 'UTC' for now, but please set date.timezone to select your timezone. in /home/thcfinder.com/public_html/includes/functions.php on line 98
 Colorado: Crowds gather for 4/20 rally | Events Marijuana Blog | THC THC Finder 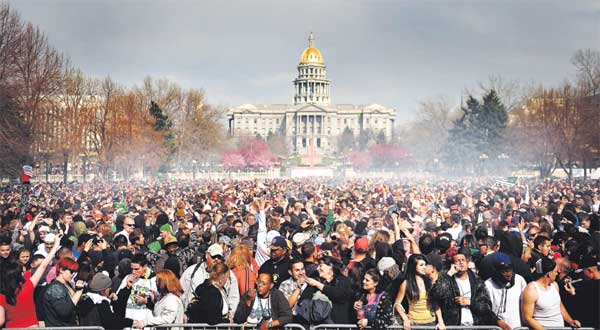 Thousands of marijuana enthusiasts are converging upon Denver's Civic Center Park for an event that has come to symbolize Colorado's burgeoning claim as the nation's cannabis capital.
Denver's annual April 20th pro-marijuana smoke-out — known as the 420 Rally — is reputedly the largest of its kind in the world on a day that has come to be regarded as a ganja holiday. Organizers expect the rally to draw tens of thousands of people, though police have generally estimated past rallies at fewer than 10,000 participants. A similar, slightly smaller event is expected to take place on the University of Colorado campus in Boulder.
The signature moment of the rally occurs at 4:20 p.m., when participants collectively light up and a thick cloud of marijuana smoke rises over the park. Organizers say the goal of the rally is to bring people together to protest peacefully marijuana prohibition.
Denver Police spokesman Sonny Jackson said officers will monitor the event but do not plan a crack-down.
"We're going to use discretion as we always do in how he handle the situation," Jackson said. "But officers will be out there to ensure public safety."
This year's rally marks the unofficial kick-off to the annual conference of the National Organization for the Reform of Marijuana Laws, or NORML, which starts tomorrow in Denver. In announcing the conference, NORML lauded Colorado as a relative pot paradise.
"Colorado has emerged as the geographic center of legal medical cannabis in America," the organization wrote in a news release. "... Cannabis commerce has come of age during the country's longest and steepest recession, (and) Colorado is at the center of this public discussion and positive changes in laws."
(Source)
Comments