Warning: date(): It is not safe to rely on the system's timezone settings. You are *required* to use the date.timezone setting or the date_default_timezone_set() function. In case you used any of those methods and you are still getting this warning, you most likely misspelled the timezone identifier. We selected the timezone 'UTC' for now, but please set date.timezone to select your timezone. in /home/thcfinder.com/public_html/includes/functions.php on line 98
 PhillyNORMLs 2011 Cannabis March | Events Marijuana Blog | THC Finder THC Finder 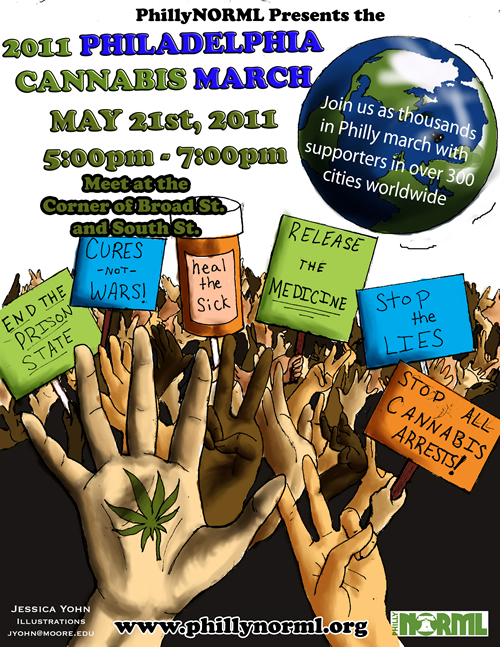 PhillyNORML(National Organization for the Reform of Marijuana Laws)’s 2011 marijuana march on South Street this year will take place this Saturday May 21st. Participants are asked to maat at 5:00PM at the intersection of Broad and South Streets for a peaceful demonstration, while doors at the TLA open at 6:30PM for The Philadelphia Freedom Festival.
PhillyNORML has partnered with the bands Psychadelphia, Before the Accident Happens, The Primate Fiasco, I Yan I Arkestra, The Thirst Quenchers, and The Synth Circus for the concert (tickets are still available at $15 and will be $20 at the door).
Guest speakers this year at the march will be National NORML Executive Director Allen St. Pierre, Celebstoner.com editor Steve Bloom, and Rob Dougherty from PhillyNORML among others.
More information for the event can be found at the Facebook event page, and at PhillyNORML’s event page.
(Source)
Comments