Warning: date(): It is not safe to rely on the system's timezone settings. You are *required* to use the date.timezone setting or the date_default_timezone_set() function. In case you used any of those methods and you are still getting this warning, you most likely misspelled the timezone identifier. We selected the timezone 'UTC' for now, but please set date.timezone to select your timezone. in /home/thcfinder.com/public_html/includes/functions.php on line 98
 Marijuana blocks post-traumatic stress? What reefer research says | THC Finder 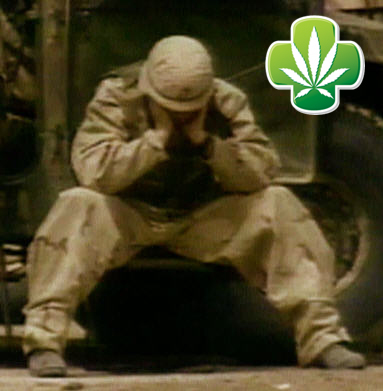 Is Marijuana the cure for PTSD? New research shows some promising results which may just prove another ailement that Marijuana has medicinal value for.

(CBS) Can pot prevent post-traumatic stress disorder, a.k.a. PTSD? New research on rats suggests that it just might.
In a study published in the journal Neuropsychopharmacology, Israeli scientists showed that injections of so-called "cannabinoid" compounds extracted from marijuana blocked development of PTSD-like symptoms in rodents that had been subjected to extreme stress.
But timing was key.
"We found that there is a 'window of opportunity' during which administering synthetic marijuana helps deal with symptoms simulating PTSD in rats," study leader Dr. Irit Akirav, a psychologist at the University of Haifa, said in a written statement.
For the study, the scientists divided the rats into four groups. One group got no marijuana, and the other three groups were given the cannabinoid injections at different time intervals after being exposed to extreme stress - one group two hours after the stress, another 24 hours after the stress, and the third 48 hours afterward.
One week later, the researchers observed the rats and noticed that those who got no pot or pot after 48 hours continued to display high anxiety and PTSD-like symptoms. But the symptoms had disappeared in the rodents who got pot two or 24 hours after experiencing the stress.
Talk about lucky rats.
Does the study really suggest that pot might prove helpful for humans at risk for PTSD? Maybe so. Experts say rats resemble humans in their response to extreme stress, with symptoms including an exaggerated startle reflex (being easily startled) and learning impairments. But since humans live longer than rodents, the researchers said, the "window of opportunity" might come a bit later than it did for the rodents.
PTSD is an anxiety disorder that some people get after witnessing or living through a traumatic event - combat, sexual assault, physical abuse, natural disasters, etc. Symptoms include bad dreams, flashbacks, and frightening thoughts. The disorder is typically treated with medication, psychotherapy, or a combination of the two.
About 6.8 percent of Americans will develop PTSD at some point in their lives.
(Source) http://www.cbsnews.com
Comments