Warning: date(): It is not safe to rely on the system's timezone settings. You are *required* to use the date.timezone setting or the date_default_timezone_set() function. In case you used any of those methods and you are still getting this warning, you most likely misspelled the timezone identifier. We selected the timezone 'UTC' for now, but please set date.timezone to select your timezone. in /home/thcfinder.com/public_html/includes/functions.php on line 98
 Why does the Federal Government have a patent for Medical Marijuana? | THC Finder

Why does the Federal Government have a patent for Medical Marijuana? 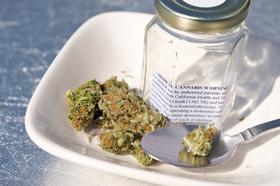 On the one hand, United States federal government officials have consistently denied that marijuana has any medical benefits. On the other, the government actually holds patents for the medical use of the plant.
Just check out US Patent 6630507 titled "Cannabinoids as antioxidants and neuroprotectants" which is assigned to The United States of America, as represented by the Department of Health and Human Services.
The patent claims that "Cannabinoids have been found to have antioxidant properties, unrelated to NMDA receptor antagonism. This new found property makes cannabinoids useful in the treatment and prophylaxis of wide variety of oxidation associated diseases, such as ischemic, age-related, inflammatory and autoimmune diseases. The cannabinoids are found to have particular application as neuroprotectants, for example in limiting neurological damage following ischemic insults, such as stroke and trauma, or in the treatment of neurodegenerative diseases, such as Alzheimer's disease, Parkinson's disease and HIV dementia."
The patent was obtained in October of 2003.
Cannabinoids, for those who were wondering, are a group of chemical compounds found in marijuana that are also referred to as terpenophenolic compounds. One specific cannabinoid compound found in cannabis is tetrahydrocannabinol, more commonly known as THC. This substance gives marijuana its psychoactive effects.
Cannabis Sativa is the flower of a plant that is dried and smoked, vaporized, or ingested in food through cooking with canna-butter. When used the active chemical in the plant, thc, works in the brain causing the user to feel "high." This can be described and experienced in many different ways depending how it agrees or disagrees with the user. Most commonly effects are a feeling of a calm easy escape from the everyday stress on the mind, laughing, "munchies", as well as many other feelings.
The US government may hold this patent, but that will not stop their officials from consistently denying the benefits of medical marijuana. An FDA spokesperson, for instance, has claimed that "smoked marijuana has no currently accepted or proven medical use in the United States and is not an approved medical treatment."
I guess she didn't get the memo.
Source: http://www.digitaljournal.com
Comments