3 charged after receiving marijuana via FedEx 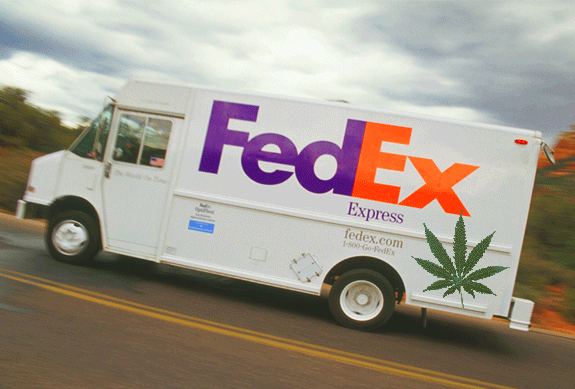 Three men were charged Wednesday after investigators found marijuana that had been delivered via FedEx to a home in Henry County, Kentucky State Police said.

State police learned that a package containing "a sizable quantity of marijuana was expected to be delivered to 5363 Castle Highway in Pleasureville from California," according to a news release from the Campbellsburg state police post.

Troopers began surveillance of the address in Henry County. After the package was delivered, a vehicle driven by Evan Roseman, 24, of Crestwood, left the home, state police said. Police stopped the vehicle in Eminence and found a little less than half a pound of marijuana.

Troopers returned to the home in Pleasureville and arrested Eric Williams, who lived at the home. Williams was charged with possession of marijuana and possession of drug paraphernalia.

Weed, the People: How a Cannabis Patient Lost Her Foster Kids 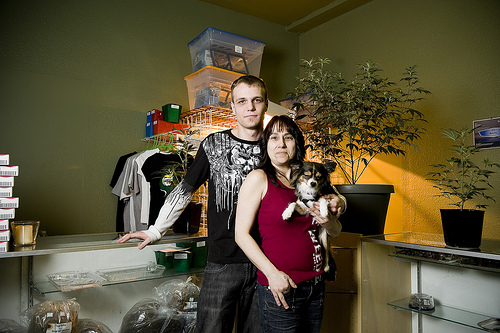 One passage from today’s cover story about the business of marijuana in Oregon may have jumped out at you—Kat Cambron, co-owner of Wake n Bake Cannabis Lounge in Aloha, had three foster kids removed from her home last week.

Here’s a fuller account of how authorities removed those three teenage boys from the home Cambron shares with her husband in Aloha. Cambron andMichael Balter, executive director of the Portland-based nonprofit Boys & Girls Aid, disagree on several key points in the story.

Boys & Girls Aid is one of about a dozen private agencies in the Portland area that recruit, train and certify foster parents. The agency then places and monitors foster kids in certified homes on behalf of state or county government.

As for Cambron, she had suffered serious neck, back, shoulder and hip injuries when she rolled an ATV at the Oregon Dunes in 2005. Cambron underwent a series of surgeries and spent years on pain medication.

Cambron, who has one adult daughter of her own, became a certified foster parent for Boys & Girls Aid in October 2009. Before she was certified, Cambron says she informed the agency in writing that she was on several kinds of heavy medication—including Dilaudid (a painkiller), Percocet(another painkiller), Flexeril (a muscle relaxant) and Valium.

She says Boys & Girls Aid knew she was on those medications and approved her as a foster parent. But Balter says that based on a report from Cambron’s doctor, the agency did not believe Cambron was on any medication—and Balter says Cambron never disclosed she was.

“They definitely knew,” Cambron insists. “What they’re doing is trying to twist it.”

For the next 15 months after becoming a certified foster parents, Boys & Girls Aid trusted Cambron and her husband to care for some of its most troubled kids—teenage boys, many of whom had violent tendencies and a history of running from other foster homes. Most were placed for short-term stays in Cambron’s home, the longest for three months. Cambron estimates she has cared for about 40 kids in all.

After spending nearly a year as a certified foster parent, Cambron says she unwittingly ate a cannabis-infused cookie at a party last September. She discovered pot was far more effective at alleviating her pain than the cocktail of pills she’d been prescribed.

Cambron became a state-certified medical-marijuana patient in late September. As a result, she says she cut her number of medications from 18 to five. But she also learned a lack of reliable resources exist for patients to get their weed. So she decided to open Wake n Bake with a friend who had more experience in the pot world, Andrew Gwin.

The cannabis lounge opened the day before Thanksgiving. Cambron says she told Boys & Girls Aid only that she was opening a consignment shop—she says she didn’t mention weed because she was unsure the business would last. But after giving interviews to WW for the cover story, Cambron informed the agency Jan. 7 that she was a pot patient and had opened a marijuana lounge.

Cambron says the agency told her later that same day that they were immediately removing the three boys who were in her home at the time. Cambron says an agency official told her she could no longer be a foster parent because marijuana use violates Boys & Girls Aid policy. The kids were removed the following morning, on Jan. 8.

Cambron says it’s deeply hypocritical for the agency that allowed her to care for kids while on heavy pain meds to take the children away after she switched to marijuana.

“I’m really upset at our system,” Cambron says. “That does not seem to me to be a reason to not help children. I am much clearer.”

On Jan. 7—the day agency officials informed Cambron they were removing the kids—Balter declined to discuss the case in detail with WW pending Cambron’s written permission. But Balter indicated in a phone interview he was concerned Cambron was a marijuana user.

“Many of our young people have drug addiction issues,” Balter said. “If they can find that in the home, or smell it, or see it, that’s very provocative.”

After receiving written permission from Cambron to discuss details of her case, Balter told WW on Jan. 10 that his agency has no specific policy against marijuana use. Unlike the interview three days prior in which he indicated pot was the main issue, Balter said Jan. 10 the agency took Cambron’s kids because she wasn’t immediately forthcoming about becoming a patient and opening the lounge.

“In all honesty, this is about trust,” Balter said. “How could we put children in a home with someone who isn’t telling us all along what’s going on?”

Cambron says the agency is backpedaling on the marijuana issue because she mentioned to them she may consult a lawyer about a legal claim under the Americans with Disabilities Act.

“That’s really interesting that they’re changing their story, because they were wrong and they know it,” Cambron says. “Now they’re attacking me personally after everything I’ve done for them? How rude is that?”

Last week, a Denver Lawyer named Andrew Reidfiled a petition on behalf of Kathleen Chippi, a marijuana dispensary owner from Nederland, claiming that the regulation passed by the state Legislature last year violated the state's constitution.

The petition argued that the regulations violate marijuana patients' constitutional right to privacy be requiring that their purchases be videotaped.

"Apparently, the Supreme Court does not think that it is a matter of great urgency that sick and dying people in Colorado are being denied their constitutional rights of safe and confidential access to medicine," Chippi told the Colorado Springs Independent on Tuesday.

The plaintiff will now file their case in a lower court.

Over 130 people attended the Cannabis Industries Training Centre two day conference at the Holiday Inn in Redding over the weekend. The event was designed to educate people about the medical marijuana industry and discuss all of the pros that it has to offer. The event was attended by caretakers, representatives from local collectives, and industry professionals. John Coonradt one of the organizers says he suffered from PTSD after fighting in the Vietnam War and medical marijuana has allowed him to spend less time in bed and more time with his grandkids. 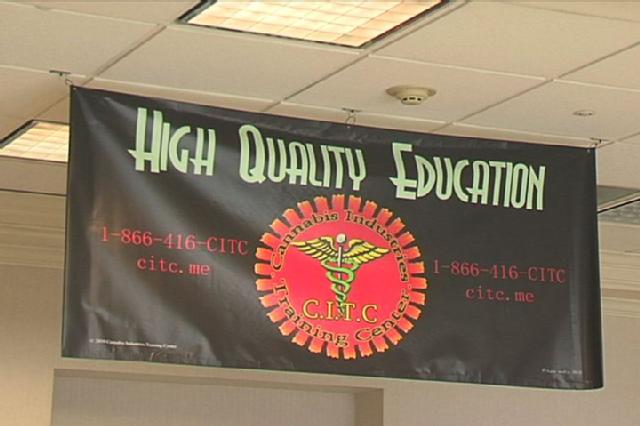 He hopes to bring awareness to others who are interested in taking medical cannabis. “I don't want to sit there and drool and go to sleep half the day,” said Coonradt. “With the cannabis I don't have to worry about that because there's never been an overdose on cannabis.” Organizers hope to eventually expand the seminar into a series of classes for aspiring growers. 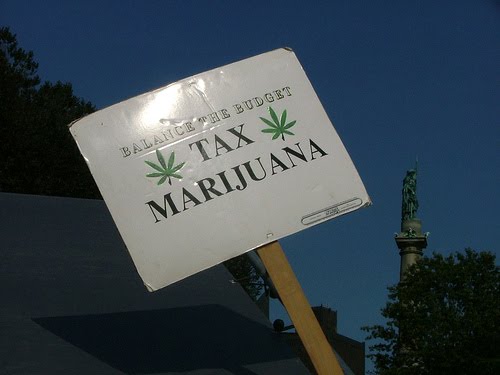 While it makes sense to pay an income tax on net profit like any other business, LC-798 will require medical marijuana cooperatives to pay an additional "income tax" based on a flat 10% rate to the Oregon Department of Revenue.  This tax will be comprised of the following:

This tax will be in addition to regular income taxes required for the cooperative as a "business" entity, as well as personal income taxes for all members who may receive dividends.

While the tax itself is troubling, especially since it requires medical patients to help fund an account designated for law enforcement, there are further concerns coming to light in recent days.  A January 8 New York Times article on a raid in California highlights a recent concern regarding medical marijuana cooperatives.  Harborside, one of the largest dispensaries in California, is currently being audited by the IRS, according to Chief Executive Officer Stephen DeAngelo:

Though federal authorities have halted raids on medical marijuana dispensaries under the Obama administration, the I.R.S. has shown a new interest.

Harborside officials said the I.R.S. was raising questions about a section of the tax code known as 280E. That section, aimed at drug kingpins, prohibits companies from deducting any expenses if they are “trafficking in controlled substances.”

That section of the Federal Tax Code clearly states that expenses incurred while “trafficking in controlled substances” are not allowed to be deducted:

According to DeAngelo: “Our contention is that what we’re doing is legal and not trafficking, and it’s not appropriate to apply it to us."  There are no additional taxes mandated under the California law, although some localities have attempted to implement some sort of medical marijuana tax.

If Oregon cooperatives cannot deduct their costs of operating the cooperative from their taxes, and are then mandated to pay an additional 10% tax on top of federal and state income taxes, how can Stormy Ray claim that this bill is meant to help provide an “affordable supply system?”

Even Harborside, among the largest and most successful of California’s medical marijuana dispensaries, is concerned that this tax code is so burdensome that Harborside“could be taxed out of business if the law was not changed.”  A 2007 Tax Court finding against Californians Helping to Alleviate Medical Problems Inc. solidified this interpretation of Section 280E:

Forty-seven percent of the members suffered from AIDS; the remainder had cancer, multiple sclerosis and other serious illnesses. On its final tax return for 2002, the taxpayer showed a $239 loss. The IRS denied all the nearly $213,000 in deductions because, it concluded, the taxpayer’s principal purpose was to traffic in marijuana.

Cooperatives will be paying taxes far higher than any other business in Oregon, before even accounting for the new “income tax” imposed in this bill.  This will not make medical marijuana more affordable for patients – and it could potentially set them up for criminal prosecution for tax evasion if they do not calculate the taxes correctly.

DeAngelo sums it up nicely: “This is an industrywide issue.”

The Prescott Valley Planning and Zoning Commission will re-discuss zoning for medical marijuana dispensaries and cultivation when the panel meets Monday evening. The Community Development Department has revised a draft ordinance as a response to comments and statements made at the December 13th study session. The staff will prepare the ordinance due to the statewide approval of the proposition 203 which allows the use of medical marijuana. The ordinance is 7 pages long and proposes regulations and also calls for non-profit organistations to operate dispensaries. 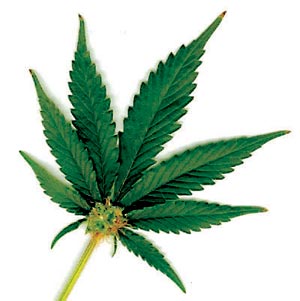 Marijuana cultivation facilities or in other words places to grow medical marijuana would be allowed in C-3 districts and inside dispensaries.The 500-foot distance requirements also would apply to cultivation facilities. Cultivation sites could cover a maximum of 3,000 square feet in floor space. The ordinance also contains provisions for caregivers to grow marijuana in C-3 districts. The Medical Marijuana Policy Project estimates 65,000 people in Arizona will be registered medical marijuana users by the end of this year. An estimation says that Prescott Valley would have as many as 835 registered users based on the town's population.