Would Donald Trump Be A Marijuana Friendly President?

If you follow politics, or for that matter if you follow any media outlet in America, then you know that the 2016 Election is in full swing, and there are a number of candidates that are running for President of the United States. The candidate that has been receiving the most attention lately, for better or worse depending on how you feel about him, is clearly Donald Trump. Donald Trump has been a long time businessman, has been a reality TV star, and is one of the most controversial figures in America right now. Putting all of his other political views aside, how does he feel about marijuana?

As seems to be the case on a lot of things with Donald Trump, the answer is not exactly clear. Donald Trump has made conflicting statements over the years in regards to marijuana. Tom Angell highlighted some of those statements in an article that he wrote for Marijuana.Com:

In 1990, Trump called for legalizing all drugs. ”We’re losing badly the war on drugs. You have to legalize drugs to win that war,” he said. “You have to take the profit away from these drug czars… What I’d like to do maybe by bringing it up is cause enough controversy that you get into a dialogue on the issue of drugs so people will start to realize that this is the only answer; there is no other answer.”

But at the 2015 Conservative Political Action Conference, Trump stated that he’s against the legalization of marijuana. ”I think it’s bad, and I feel strongly about that,” he said. “They’ve got a lot of problems going on right now in Colorado, some big problems.” However, when asked about the states’ rights aspect to marijuana laws, Trump said, “If they vote for it, they vote for it. 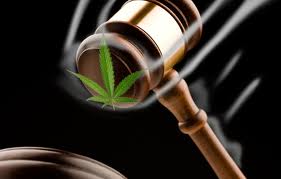 WASHINGTON -- The Justice Department will not attempt to challenge state laws that allow for the medical and recreational use of marijuana as long as the drug sales do not conflict with eight new federal enforcement priorities.
Those include the distribution of marijuana to minors and sales that assist or act as cover for trafficking operations, according to a directive being issued Thursday to federal prosecutors across the country.
Although the directive issued by Attorney General Eric Holder will apply nationwide, it will largely affect the 20 states and the District of Columbia that allow for medical marijuana use, and Colorado and Washington where state laws allow medical and recreational use by adults.
A Justice official, who was briefed on the directive but not authorized to comment publicly, said Holder briefed the governors of Colorado and Washington earlier Thursday on the new prosecutorial directive in a conference call. Federal prosecutors were expected to begin briefing authorities in other states later Thursday.
The new guidelines do not change marijuana's classification as an illegal drug, the official said. But the document effectively discourages the pursuit of individual non-violent marijuana users who have no links to criminal gangs or cartel operations.
The document contains a list of eight new federal enforcement priorities, which is expected to guide federal authorities when weighing decisions on marijuana prosecutions. It also notified state authorities that the federal government will intervene if the states violate those priorities, including the distribution of marijuana to minors.
Read more: http://www.usatoday.com
Comments 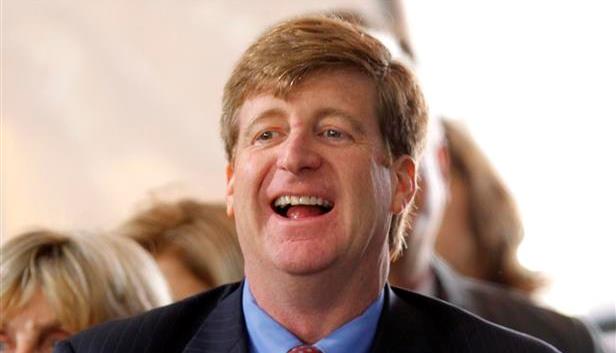 Former Democratic Rep. Patrick Kennedy has kicked off a national campaign to help prevent the legalization of marijuana.
"I cannot be silent, and I don't imagine anyone else could be silent if they knew the facts as I know the facts," Kennedy, son of the late Sen. Ted Kennedy, told McClatchy Newspapers.
"All I’m trying to do is get those facts to the broader public."
Kennedy's words come from experience. The 45-year-old ex-politician is a recovering drug addict who fell asleep behind the wheel of his car and crashed into Capitol Hill security barriers in 2006. In 2010, he announced he wouldn't run for re-election after eight terms in office representing Rhode Island.
Kennedy now is chairman of Project SAM — Smart Approaches to Marijuana — a nonprofit group he founded in January to promote policies that decrease marijuana use.
"I did try and experiment with marijuana, but I quickly migrated to other drugs and alcohol,” Kennedy told McClatchy.
He added that while he once approved of the use of medical marijuana, "I now stand corrected by the science."
Kennedy said he is not surprised that Washington and Colorado have voted to legalize marijuana.
Read more: http://www.newsmax.com
Comments

Judging From Prosecutions, Obama Is 80 Percent Worse Than Bush on Medical Marijuana 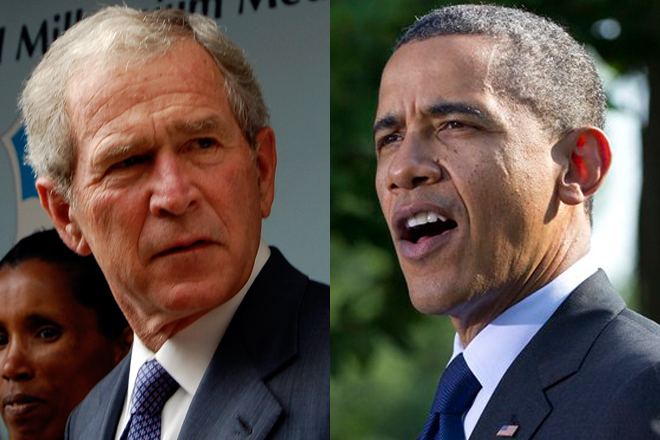 According to a new report from California NORML, "over 335 defendants have been charged with federal crimes related to medical marijuana in states with medical marijuana laws." Despite Barack Obama's promises of prosecutorial restraint in this area, "153 medical marijuana cases have been brought in the 4¼ years of the Obama administration, nearly as many as under the 8 years of the Bush administration (163)." In other words, Obama is averaging 36 medical marijuana prosecutions a year, compared to 20 a year under his predecessor. And although Attorney General Eric Holder has repeatedly claimed the Justice Department is not targeting suppliers who comply with state law, "the DOJ has targeted many facilities that were in full compliance with local laws and regulations."
California NORMLThe overwhelming majority of these cases, 259, involve California dispensaries. California NORML also counts at least 31 cases in Montana, 15 in Nevada, 12 in Michigan, 10 in Washington, six in Oregon, and two in Colorado. Nine out of 10 cases concluded so far have resulted in convictions, with 158 defendants receiving prison sentences totaling more than 480 years. About 50 are in federal prison right now, while others await sentencing or have been sentenced but have not begun serving their time yet.
Yesterday Americans for Safe Access released a report that puts the price tag for these prosecutions at $500 million. "Far outspending all of his predecessors," it says, "President Obama has dedicated nearly $300 million to such enforcement efforts, despite his repeated pledges to not use Justice Department funds in this way."
Read more: http://reason.com
Comments

Don’t look now, but nullification is about to spread to the courtroom.  NBC 7 in San Diego reported this week that the city’s mayor, Bob Filner, has called for jurors to refuse to convict the operators of licensed marijuana dispensaries who have been arrested under anti-drug laws by the federal government.  State and local laws in San Diego permit the sale and use of marijuana for medicinal purposes.
San Diego Mayor Bob Filner has injected himself into a federal criminal case against the operator of a medical marijuana dispensary, intensifying his standoff with federal prosecutors on cannabis enforcement issues.
Filner’s urging jurors who’ll be chosen for the trial to reject federal law in favor of state statutes under a centuries-old legal concept known as “jury nullification”– whereby jurors can refuse to convict people under laws they believe should not be applied.
“It’s time, like with Prohibition, to step back and say this was a stupid thing to do,” Filner said outside the courthouse. “Let’s step back, and juries ought to take the lead and say that to the federal government…and if the federal government isn’t listening to the mayor, maybe they’ll listen to the jury.”
Against the articulated wishes of the community, the federal government continues to raid these dispensaries and arrest the people who operate them, actions that clearly violate both the Constitution and the sovereignty of the state and local governments.  Filner in decrying this federal usurpation stated, “This is way overdoing it when local laws, state laws allow compassionate use of medical marijuana.”
Read more: http://blog.tenthamendmentcenter.com
Comments 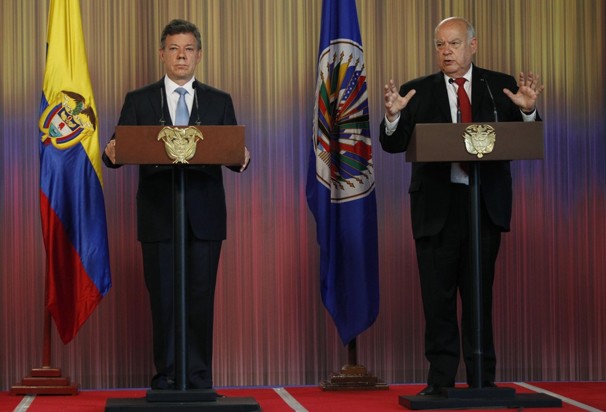 On the Latin American street, the Organization of American States has always borne a reputation, often undeserved, as Washington’s lackey. But the OAS, based in Washington, just tossed the White House a message it would rather not hear: It’s time to seriously discuss legalizing marijuana as one means of reducing the western hemisphere’s harrowing drug violence. That conclusion, from a study presented last Friday in Bogotá, Colombia, by OAS Secretary-General José Miguel Insulza, is one that a growing number of Latin American governments — including Uruguay, which legalized marijuana last year — are urging the Obama Administration to accept. Having the motion seconded by Washington’s “lackey” makes it harder to ignore.
But even as Insulza and Colombian President Juan Manuel Santos were hailing the OAS report last week, something else was brewing in Bogotá that could further undermine resistance to pot legalization. The Colombian capital is about to start a program that uses marijuana to wean junkies off bazuco, a cheap but fiercely addictive cocaine paste. It will mark one of the largest experiments to determine if marijuana — which legalization opponents still insist is a “gateway” to harder drugs like cocaine and heroin — is in reality an “exit” drug. If so, it will only serve to reinforce the argument, mentioned by the OAS study, that marijuana is a relatively benign drug, far more comparable to alcohol than it is, say, to crystal meth.
Read more: http://world.time.com
Comments