Warning: date(): It is not safe to rely on the system's timezone settings. You are *required* to use the date.timezone setting or the date_default_timezone_set() function. In case you used any of those methods and you are still getting this warning, you most likely misspelled the timezone identifier. We selected the timezone 'UTC' for now, but please set date.timezone to select your timezone. in /home/thcfinder.com/public_html/includes/functions.php on line 98
 Who Benefits from Obama's Reefer Madness? | Politics Marijuana Blog | THC Finder

Who Benefits from Obama's Reefer Madness? 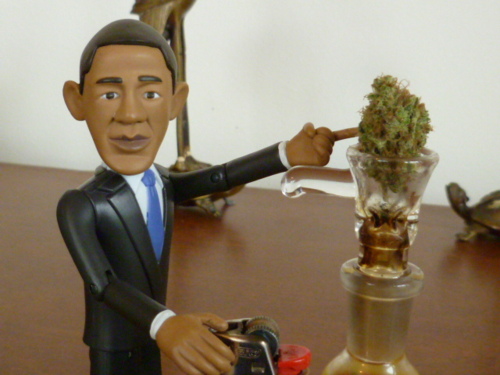 Defending its crack-down on legal medical marijuana dealers, the DEA has disingenuously declared that pot is an ineffective treatment for pain. But over at the FDA, the first painkiller made from cannabis is sailing toward approval.
Obama seems to want to have it both ways: Weed has medical benefits, but then again it doesn't; it's as dangerous as heroin, but safe enough to give to sick patients in medical experiments. Whose interests are being served here, and who's getting the shaft?
It's hard to deny claims by critics that the president has largely given the shaft to advocates of medical marijuana. Hitting the re-election trail this week, Obama had to duck a question about his record on pot-for-pain at a Minnesota town hall meeting, leaving unresolved—after more than two and a half years—his campaign promise to respect the right of patients to make decisions about their own care. Instead his administration has pursued a confused two-pronged policy: allowing Big Pharma unimpeded license to pursue the profitable medical marijuana market, while threatening thousands of patients using state-licensed cannabis with federal intervention and even arrest.
Critics liken Obama's cannabis conundrum to the way he dealt with the financial crisis—bailing out Wall Street while leaving millions of homes on Main Street to fall into foreclosure. If this sounds like too harsh a condemnation of a president that rabid Republicans have done nothing but hate on, try making sense of recent developments in federal medical-marijuana policy.
Back in March, the U.S. Drug Enforcement Administration (DEA) exercised its emergency authority to outlaw the use of five “fake” marijuana products like Spice and K2. “These products consist of plant materials that have been coated with research chemicals that claim to mimic THC, the active ingredient in marijuana, and are sold at a variety of retail outlets, in head shops and over the Internet,” the DEA said in a prepared statement.
(Read more) http://www.thefix.com
Comments