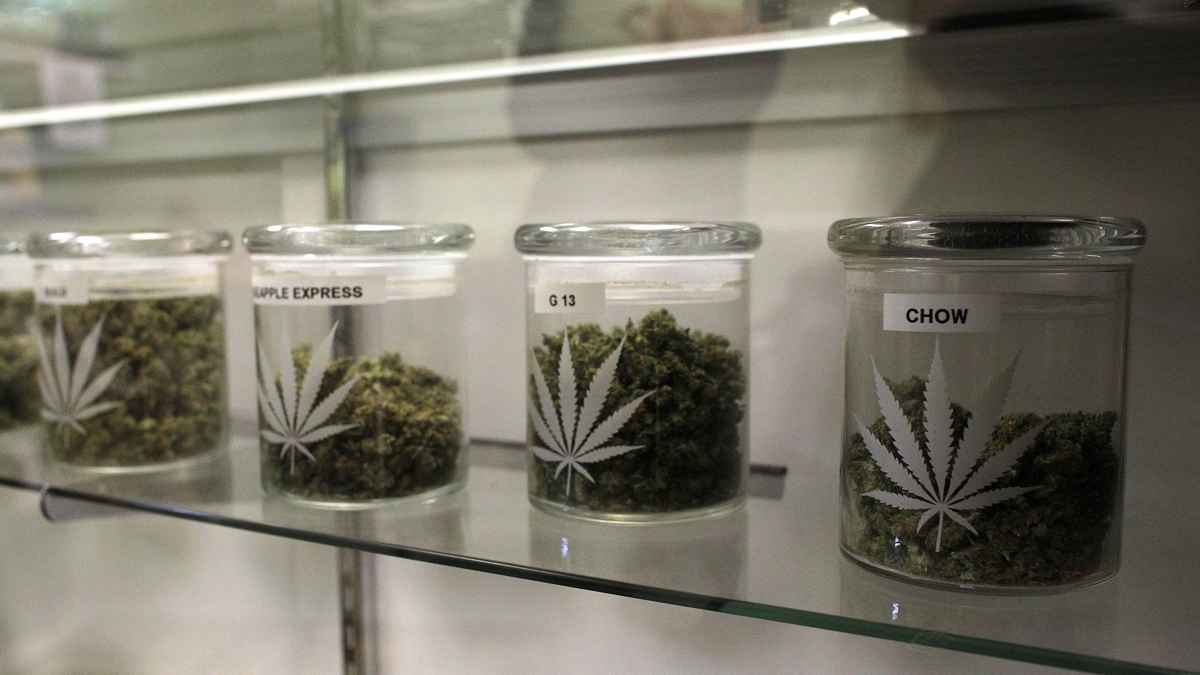 There are no signs out front, but people still show up at a drab beige warehouse outside Atlantic City to ask whether medical marijuana is available. Inside the cavernous building, 1,500 plants are growing beneath glowing fuchsia, yellow, and white LED lights inside a makeshift room.
Soon, the sweet-smelling, leafy plants will be harvested. They now stand 18 inches tall, each in a three-gallon pot, after three months of nurturing. Growers in white lab coats fussed over them last week, culling out unwanted half-male half-female specimens while three New Jersey health inspectors watched. In about two weeks, the cannabis will be gathered, dried and packaged, said William Thomas, Compassionate Care Foundation's hands-on CEO.
The bar-code number on each seed will be checked again when the final product is placed in a vial. Then, on Oct. 15, CCF hopes to open, becoming South Jersey's first dispensary. But don't envision patients lining up at the clinic's entrance at the front of the warehouse, in an industrial park in this suburban community, nine miles from the ocean.
No walk-ins are allowed. Since medical marijuana was legalized in New Jersey nearly four years ago, a dizzying array of regulations have been drafted by the state health department to restrict access to registered patients who have one of a dozen debilitating conditions. A licensed physician must grant approval, and patients may buy only two ounces per month.
Read more: http://www.philly.com
Comments 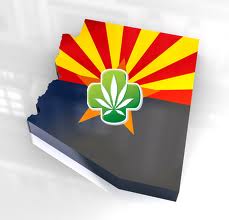 Medical-marijuana dispensary operators are apprehensive about plans by a powerful marijuana-advocacy group to campaign for full legalization of the drug in Arizona.
The Marijuana Policy Project, a Washington, D.C.-based organization that advocates marijuana legalization and regulation, is a former ally of the dispensary owners, having played a key financial and public-relations role in passage of the state law that created the burgeoning medical-marijuana program.
Bolstered by the Obama administration’s announcement that it will not challenge such laws, the group intends to pursue full legalization in Arizona through a voter initiative in 2016 and in nine other states over the next two election cycles. The initiative will be modeled on a program in Colorado, which has legalized marijuana for recreational use.
But the group may have a tough time selling their plan to the state’s medical-marijuana dispensary operators, who are capitalizing on the growing market, have invested thousands of dollars to get up and running and say they favor the status quo — a system in which doctors must recommend cannabis for medical purposes. The program allows certain businesses and individuals to grow marijuana in large quantities, but home growers are fading away as dispensaries open across the state.
Uneasiness among some dispensary operators highlights the divide between medical-marijuana advocates and recreational proponents — a split that could complicate any effort to further loosen Arizona’s marijuana laws.
“I’m not so sure that, at this stage, we would be for immediate legalization,” Bill Myer, co-owner of Arizona Organix in Glendale, told The Arizona Republic. “We’ve still got some issues to work through with the laws we currently have. The program is still in it’s infancy.
Read more: http://www.azcentral.com
Comments

WASHINGTON – When Rabbi Jeffrey Kahn told his former congregants that he was opening a medicinal marijuana dispensary, they were nothing but supportive.
“The cannabis plant was created by God on the second day of creation when God created all the other plants, and touching this one isn’t forbidden,” Jeff said in a June interview.
As somebody who “came of age as a rabbi during the age of AIDS,” Jeff’s no stranger to the pain felt by those without the access to the medicine they need.
And as “a lifelong educator,” Jeff said the Jewish aspect of the work he does now is strong. He still teaches people to question preconceived falsehoods, whether it’s in Hebrew School or about medicinal marijuana. The fact that that education can then lead to people getting the medicine they need makes it all the more Jewish.
“The whole idea of breaking through those kinds of barriers and being able to help to connect people to what can really help them, it just seems a natural extension of my rabbinate and a natural extension of what’s important to me about how Judaism views life and the world,” Jeff said.
When you’re sick, Jeff said, it’s OK to eat on Yom Kippur. The inverse is true: As Jews, we have a responsibility to help those that are sick even when we should be praying.
“The mitzvah of helping people is more important,” Jeff said.
So Jeff ended his 30-year career as a congregational rabbi and dedicated three years of his life, attending countless local government meetings; speaking with local business owners, neighbors and even D.C. Councilmember Muriel Bowser; and renting a space for two and a half years — all before he even knew if the center would open.
Read more: http://newvoices.org/
Comments

One of Democrat Bob Filner’s first acts in January as the newly-elected mayor of San Diego was to end the city’s crackdown on medical marijuana dispensaries.
One of the first acts of acting Mayor Todd Gloria, after Filner was driven from office three weeks ago by a barrage of criticism for alleged sexual harassment, was to reinstate the crackdown.
San Diego, a conservative Republican stronghold despite Filner’s election, does not have an ordinance for regulating medical marijuana dispensaries, although state voters approved the Compassionate Use Act in 1996 and authorized nonprofit cooperatives as dispensaries in 2004. Federal law still criminalizes possession and sale of the drug.
Amid the confusion and contradictions of local, state and federal law, dispensaries popped up around the city. The city council and Mayor Jerry Sanders, a Republican, finally passed a very restrictive ordinance in 2011, but voters mounted a petition drive that forced its repeal. Meanwhile, law enforcement authorities, in cooperation with City Attorney Jan Goldsmith, were shutting down dispensaries.
Around 100 were shuttered during the two years before Filner was elected mayor in November 2012. Filner campaigned for mayor on a platform that included support for medical marijuana. He had a long record as a 10-term congressman of supporting an end to the nation’s sputtering drug war, and co-sponsored the failed States’ Rights to Medical Marijuana Act in 2001.
Shortly after taking office, he lashed out at the “persecution” of marijuana advocates and suggested that pro-pot groups consider staging demonstrations to pressure the government. Goldsmith then informed Filner that as mayor he could halt the dispensary busts by ordering city officials to halt the municipal code enforcement, which he did.
But San Diego still didn’t have an ordinance governing what, if any, dispensaries could do business within city limits. Filner brought a proposal to the council in April of this year, but it was rejected out of hand. Instead of taking up Filner’s proposal, the city council tried resurrecting a version of the 2011 ordinance.
By July, Filner was embroiled in controversy stemming from allegations by at least 18 women that he had sexually harassed them, and his political initiatives were dead in the water. He resigned in August and council President Gloria became acting mayor.
Read more: http://www.allgov.com
Comments 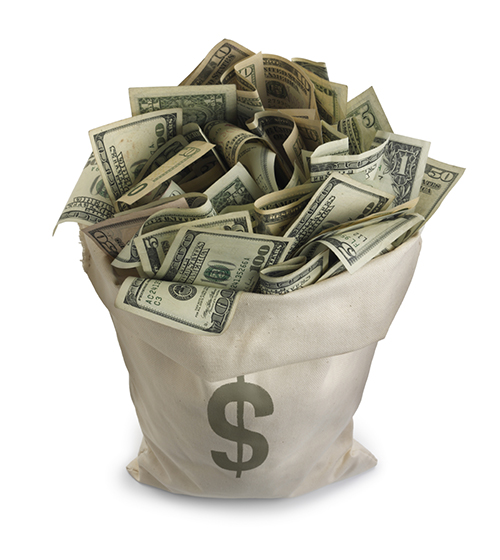 In an unexpected move that signals the Christie administration's support for New Jersey's fledgling medical marijuana program despite its misgivings about the law, the state Economic Developmental Authority today approved a $357,000 loan to the founders of a medicinal marijuana dispensary in Egg Harbor Township that plans to open in mid-October.
Compassionate Care Foundation Inc. said it would use the money to buy equipment and expand its cultivation space, add 12 good-paying jobs to the seven it has already created, and eventually produce enough medicine for about 1,500 patients a month, said CEO Bill Thomas, formerly a medical researcher. Within 10 years, the dispensary expects to generate about $2.8 million in state sales tax, he added.
The 15-0 vote by the EDA -- an independent authority connected to the Department of Treasury -- "legitimizes this business in the eyes of the public," Thomas said.
"You don't get much more mainstream than the Economic Development Authority,'' said David Knowlton, a founder and chairman of the foundation's board and the President and CEO of the New Jersey Health Care Quality Institute, a research and consumer advocacy group. Knowlton was a deputy health commissioner under Gov. Thomas H. Kean and served on Christie's transition team before he took office in 2010. "They are saying this is a mainstream public health issue."
The EDA promotes business and job growth by offering bond financing, loans, business and tax incentives, and real estate development assistance, according to the authority's website
Read more: http://www.nj.com
Comments

Washington Medical Marijuana Dispensaries Are Still Targets According To Feds 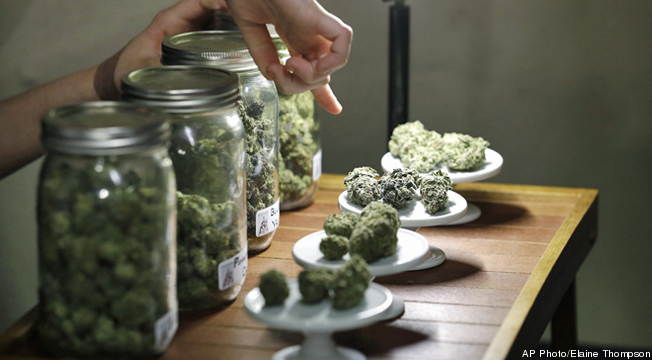 The marijuana legalization movement danced a victory dance last night at the announcement by the US Department of Justice of eight new priorities to guide US Attorneys in the prosecution of state-regulated marijuana markets.  Specifically, DoJ announced it would not be suing to enjoin the ballot initiatives passed by Washington and Colorado, that state regulated markets abiding by the eight priorities would be “less likely” to attract federal prosecution, and that well-run state programs “may affirmatively address those priorities.”
In Colorado, with its “seed-to-sale”, highly-regulated program of both medical and recreational marijuana, marijuana dispensaries are breathing a sigh of relief.  But in the state of Washington, the responses from the US Attorneys, Jenny Durkhan and Micheal Ormsby, whose districts includes Seattle and Spokane, respectively, should send a shiver down the spines of medical marijuana distributors.
We will continue to enforce the Controlled Substances Act. … We will continue our work against organized criminal organizations and their underground economy… The continued operation and proliferation of unregulated, for-profit entities outside of the state’s regulatory and licensing scheme is not tenable and violates both state and federal law.  While our resources are limited, we will continue to enforce federal law in this arena…
Washington State has no regulatory and licensing scheme for medical marijuana.  Washington even lacks the state registry card system found in almost all other medical marijuana states.  The collection of dispensaries, co-ops, and farmers’ markets that have proliferated in the Puget Sound area and the Palouse operate on a wink and a nudge since 2011 when then-Gov. Christine Gregoire line-item-vetoed the portions of Senate Bill 5073 that established a regulated dispensary system.  Gregoire’s fear at the time was that the involvement of state officials in regulating dispensaries would subject them to potential federal prosecution.  Ironically, that lack of state regulation now puts these businesses in greater danger than had Gregoire signed the regulations.
Read more: http://www.theweedblog.com
Comments