Next Saturday The 420 Games Comes To The Santa Monica Pier

The 420 Games’ first event of 2016 takes place March 26th at the Santa Monica Pier. For the first time ever, this Southern California landmark will host an organized cannabis-related event, one that is expected to gather more than 1,000 participants. Created to de-stigmatize cannabis and the people who use it, The 420 Games brings a message of wellness, fitness and health. Activists will walk, run, bicycle or skateboard to “Go the Extra Mile for Cannabis” in this 4.20 mile race; wheelchairs are welcome! Out in the water stand-up paddle boarders will follow course along the beach.

“The 420 Games were created to emphasize that highly functional people, even professional athletes, use cannabis and are hardly the lazy stoners the world has portrayed.  Fostering a new, positive mindset about those who use cannabis is going to be absolutely critical for the legalization of marijuana.” - Jim McAlpine, Creator & Producer  & Founder of SnowBomb, a source for ski & snowboard lifestyle and culture.

Special guest speakers will include LEAP (Law Enforcement Against Prohibition) member and retired Redondo Beach Police Officer Diane Goldstein, national cannabis thought leader and author of ‘The Cannabis Manifesto’, Steve DeAngelo, as well as Tracy Ryan, CEO ofCannaKids.org and SavingSophie.org. Look for special appearances by UFC Fighter Kyle Kingsbury, NFL Pro-Bowler Kyle Turley and former NFL players from the Gridiron Coalition who will have their own team of ex NFL players in attendance.

Cannabis and sports is a very popular topic these days. Check out the press release below for an event that is occurring in New York in June:

A groundbreaking panel will take place at the Cannabis World Congress & Business Exposition(CWCBExpo), June 16, 2016 at the Jacob K.  Javits Convention Center that will provide a high-level and personal discussion of the benefits of CBD found in medical marijuana and sports related injuries, including chronic traumatic encephalopathy (CTE) concussions.

Pro athletes from the NFL and NHL will provide frank insight on how legally using cannabis has helped them manage pain, become less reliant on prescription painkillers, and not affect their playing performance.  This thought-leadership panel “CTE, Concussions and CBD;” will feature:

Eben Britton, a NFL guard and tackle has played for Jacksonville Jaguars and Chicago Bears and currently is a free agent.

Riley D. Cote is former professional ice hockey player (NHL) with the Philadelphia Flyers and is currently an assistant coach with the Lehigh Valley Phantoms.

Join Tommy Chong (And Me!) At The Oregon Marijuana Business Conference In April

Yesterday the OMBC announced that Tommy Chong will be attending the conference and talking about his life and the future. I have stated many, many times on this blog that I’m an enormous Tommy Chong fan, and have been since I was a kid. I was a Chong fan well before I started consuming cannabis, which is something that I think a lot of people can’t say. I grew up watching Cheech and Chong movies and listening to their Wedding Album on vinyl. My uncle still rocks that record to this day!

Tommy Chong has seen a lot and done a lot in regards to cannabis, a lot of it occurring well before cannabis was fashionable. There is a lot that people can learn from him, from his days as one of the famed Cheech and Chong duo, to his arrest and incarceration as part of Operation Pipe Dreams, and into today with all of the activism and cannabis industry stuff that he has going on. I know that I personally can’t wait to hear what he has to say.

Check Out One Of NCIA’s Quarterly Cannabis Caucuses In April

I have attended a handful of National Cannabis Industry Association (NCIA) events, and literally every single one of them have been educational, empowering, and were fantastic for networking opportunities. NCIA does an outstanding job of advocating for its members and the cannabis industry as a whole, which is why I have always supported them. They also hire a lot of Students for Sensible Drug Policy (SSDP) alumni, which is always a smart move and a surefire way to improve any organization or company.

One type of NCIA event that I haven’t attended yet is one of their ‘Quarterly Cannabis Caucuses.’ The first round of caucuses took place in January, and I heard from several people that they were amazing. I am going to try as hard as I can to get up to the Portland caucus on April 12th to check it out. Looking at some of the people that have been talking about it on social media, it is shaping up to be an amazing event.

I really like the concept of quarterly regional events, and tip my hat to NCIA for putting these on. The cannabis industry landscape is changing at a rapid pace, with stuff changing/evolving constantly. I know in my state, Oregon, you never really know 100% what is going on with so many changes being proposed/approved and so many hearings, etc. Having a meeting every three months to get a lot of people in the same room to get educated and educate each other is a great idea in my opinion.

The 420 Games To Invade Los Angeles

Created to destigmatize cannabis and the people who use it, The 420 Games athletic event has experienced great success in San Francisco’s Golden Gate Park for the past two years. This March, The 420 Games will debut in Los Angeles, the first leg of a four-state, six-city tour. Participants are “Going the Extra Mile for Cannabis” in this 4.20 mile race that is longer than a typical 5k.   The course takes runners from the Santa Monica Pier to Venice Beach and finishes back at the pier.  Tickets can be purchased at 420Games.org

In the last 18 months, The 420 Games has acquired nearly 60,000 Facebook fans and features an event series that continues to expand. Recently featured in Newsweek magazine, The 420 Games has announced multiple events in California, Colorado, Seattle and Oregon. The event series will feature marathons, mountain bike races, and stand-up paddleboard competitions, amongst other contests.  Future locales include San Francisco, Boulder, Denver, Portland and Seattle.

“Our attendance has doubled from the first event to the second, we expect thousands of people to come run or walk for cannabis respect on March 26th in LA. There is a passion and vibe of camaraderie at these events that is very inspiring to see.” -  Jim McAlpine, event organizer and founder of SnowBomb

Cannabis Lobby Day At The Oregon Capitol On Monday 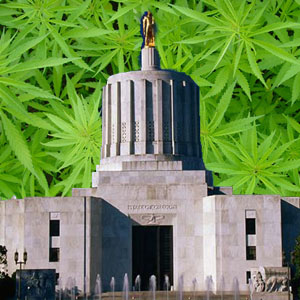 Below is an event that is happening at the Oregon Capitol on Monday, via the event’s Facebook page:

Come join our rally and let your voice be heard! Campaign for the Restoration and Regulation of Hemp (CRRH), along with several other cannabis organizations, will be participating in Cannabis Lobby Day at the Oregon State Capitol on Monday, February 8, 2016. The free speech event, will feature speakers, music and vendors, will be held from 12pm to 5pm.

* Protect the OMMP and continue the fight for patient rights and access to medicine.

* Prevent over-regulation of marijuana under M91 by the OHA, OLCC, OAC and ONI that could hinder, rather than aid, the creation, regulation and stabilization of legal marijuana related businesses.