Warning: date(): It is not safe to rely on the system's timezone settings. You are *required* to use the date.timezone setting or the date_default_timezone_set() function. In case you used any of those methods and you are still getting this warning, you most likely misspelled the timezone identifier. We selected the timezone 'UTC' for now, but please set date.timezone to select your timezone. in /home/thcfinder.com/public_html/includes/functions.php on line 98
 Pot Coffee | Recipes Marijuana Blog | THC Finder - Dispensaries - THC Finder 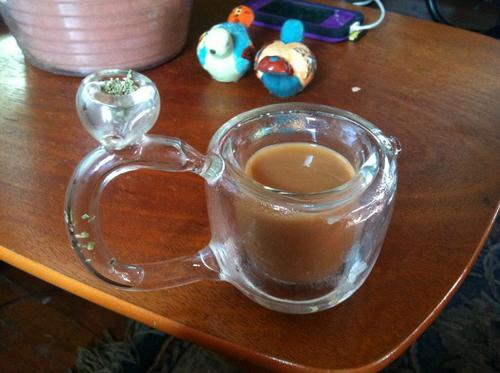 No the words aren't switched around. I really mean to say pot coffee. I was sent this amazing recipe for cannabis infused coffee and had to share. Over the summer, I shared a recipe for a cannabis infused coffee shake but this is just the real deal. Caffeine and cannabis, in the same cup. So for those of you on the go, you'll be able to stay medicated and caffeinated while at work on those long days (not to mention extremely sneaky!). So here's the recipe on how to make your own pot of pot coffee at home!
What You'll Need;
1 good pinch of pulverized hash
4 tsp finely-powdered straight Arabian mocha
2 pinches of ground nutmeg
2 pinches of ground cinnamon
1 pot of fresh brewed coffee
Sugar (to taste)
Creamer or milk (to taste)
Brew the coffee as you would normally, whether you prefer to make it in a regular coffee pot or one of the new fancy coffee machines that they're coming out with now. Put all of the ingredients that you have (keep in mind that you can adjust the amount of hash that you put in to the mix to your preference if you'd like the coffee to be stronger or weaker). Put the mixture in to a Turkish coffee pot and put over a low flame until it starts to bubble. As soon as the coffee starts to bubble, remove it rom the heat. Add in your creamer and sugar as you like and enjoy your cup of medicated coffee!
Comments