The Los Angeles City Council Friday capped the number of pot shops at 100, with only those that opened on or before September 14, 2007, qualifying to enter a new lottery system that will determine who may continue to operate. The urgency ordinance approved on a 12-0 vote follows a judge's December ruling that struck down L.A.'s old ordinance as arbitrary and capricious. The L.A. City Council acted amid concerns that pot shops were sprouting back up across the city. “Already in my district, I have illegal operators who are already redecorating and remodeling their shops ready to reopen," Councilman Paul Krekorian of the San Fernando Valley said. Councilman Jose Huizar said illegal pot shops already were popping back up in his East L.A. district. 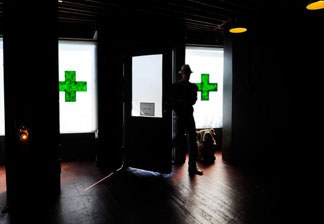 “It is affecting the quality of life," Huizar said. "The sooner we put this genie back in the bottle, it's going to improve the quality of life for thousands and thousands of Angelinos.” The new ordinance eliminates a grandfather clause that allowed as many as 187 pot shops in L.A. It retains restrictions that keep shops at least 1,000 feet away from schools, parks and churches. The law also creates a lottery to select the 100 that may remain open. Councilman Richard Alarcon said the lottery was a bad idea. “By doing a lottery, we are not able to select who the best providers will be," Alarson said. "We could literally end up with the worst providers of the bunch."

Alarcon ended up supporting the measure, and successfully lobbied the council to explore establishing and advisory council on medical marijuana. Medical marijuana advocates said the city's law remains too restrictive, and could prevent people who need pot from getting it. T.V. personality Montel Williams became emotional as he described how he desperately needed pot to treat pain caused by multiple sclerosis. “Every single one of those doctors has recommended for me to continue using marijuana because I came to a point that opiates don’t do it," Williams said. Williams is a national advocate for medical marijuana. He was arrested earlier this month for possession of a pot pipe at the Milwaukee Airport. Los Angeles City Councilman Paul Krekorian said he was sympathetic to medical marijuana users but thought the cap and other restrictions would prevent another explosion of pot shops. L.A. had as many as 1,000 at one point. "I for one am not comfortable with opening it up to the wild west again," Krekorian said

Some state lawmakers are proposing major changes to Washington's voter-approved medical marijuana system. The bill debated in the Senate health committee Thursday was proposed by Sen. Jeanne Kohl-Welles, D-Seattle. It would give medical marijuana users more protections against arrest than they currently have.

The bill also would bring the supply chain of medical pot out of the current legal gray area. Under Kohl Welles' proposal, the state could license growers, processors and sellers of medical marijuana. Qualified patients could avoid arrest by showing proper documentation, and there would be a voluntary, secure registry of authorized patients. Right now, marijuana patients are only allowed to offer a defence in court if they're arrested and charged for possession.

Medical marijuana advocates say the regulations New Jersey has proposed for medical pot don't make sense for businesses, patients or doctors. Advocates used a state Senate committee hearing today mostly to blast the proposed regulations, which had few defenders there. The hearing was a step in a rare constitutional manoeuvre the state Legislature is using to try to force Gov. Chris Christie's health department to come up with new regulations.

Some lawmakers say the rules drafted by the Christie administration don't follow the intent of the legislation that authorized medical marijuana. After the hearing, the next step is a vote to invalidate the regulations. That can't happen for at least 20 days. 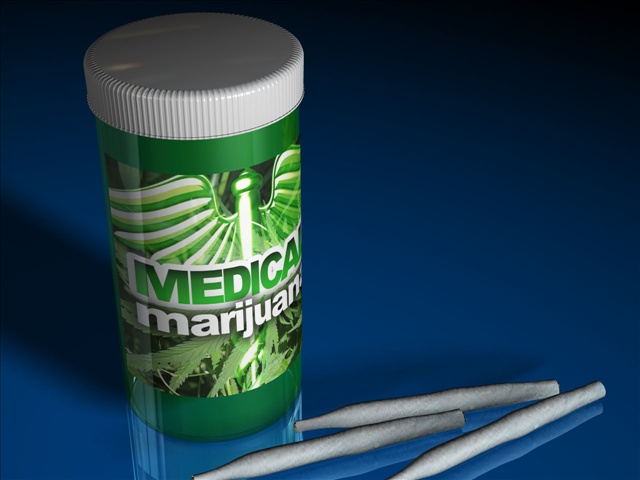 BOISE, Idaho (AP) — A northern Idaho lawmaker has introduced a bill to legalize medical marijuana in the state.

Republican Rep. Tom Trail of Moscow earlier this week sponsored the Idaho Compassionate Use Medical Marijuana Act to establish a system for patients to legally obtain and use marijuana.

Trail says it's time for lawmakers to help reduce the suffering of seriously ill citizens.

If passed, patients would need a certificate from a doctor to get medical marijuana. Patients or their caregivers would also have to register with the state before they could obtain marijuana.

Only treatment centers licensed by the state would be allowed to sell medical marijuana, and patients would be limited to 2 ounces in a 28-day period.

DEA: We Have Not Relaxed Our Policy on Medical Marijuana 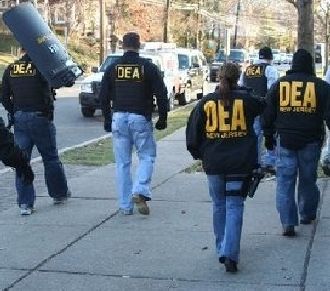 The US Drug Enforcement Administration's "Position on Marijuana 2010" is a hot document. Dated to July, it didn't really start circulating until this January when activist Ed Rosenthal found his name in it.

Since then, the DEA link to the paper is gone, but aGoogle site search yields the file. Yesterday, the Marijuana Policy Project told supporters that the DEA's position paper labels the drug law reform group Enemy #1. But that's just a little bit of the 54-page collection of anecdotal Reefer Madness.

Thin on actual research, the littlescience the DEA cites is biased. The paper almost never discloses the number of patients in a study group, and can't cite much US research — ironically, because the DEA plays a role in ensuring such studies never get approved. But the paper does relate some sad drug war stories.

- “While some people [think] the federal government has relaxed its policy on 'medical' marijuana, this in fact is not the case. Investigations and prosecutions of violations of state and federal law will continue.” 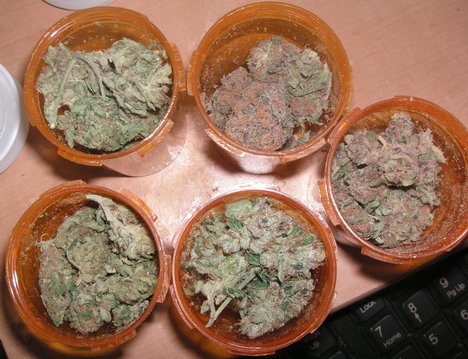 Medical marijuana advertising is taking off, propping up the fortunes of ailing media companies that have seen income from other business sectors plummet in the recession.

Advertisements offering free edibles for new patients and products such as “super silver haze” are helping to keep the San Francisco Bay Guardian, SF Weekly and East Bay Express in business. Similar ads have even started cropping up — tentatively — in more staid publications, such as the San Francisco Chronicle.

Ads for pot are growing so fast in part because they face fewer regulations and restrictions than marketing materials for cigarettes and alcohol. The only real regulation is one requiring the ads to warn customers that they need a doctor’s recommendation.

“We’ve been involved in this for years,” said Bruce Brugmann, publisher of the Bay Guardian. “We haven’t heard    any complaints.”

Not all media companies are comfortable with pot ads, and some have equivocated about whether to accept them. Some advertisers were waiting to see the outcome of the vote Nov. 2 on Proposition 19, the state pot legalization bill, before agreeing to take money from the burgeoning industry.

Ten years ago most medical cannabis clubs were intentionally low-key and relied only on word of mouth. Being illegal, they were inconsistently tolerated by the authorities.

Now, with rapidly liberalized enforcement policies, the most successful medical cannabis businesses are the ones that get their brand name out to the public. Dozens of the businesses are racing to capture the pot-smoking community’s mindshare, and are pumping hundreds of thousands of dollars into local media this year to do so.

“We probably spend around $2,500 to $3,000 a month on advertising,” said Kevin Reed, president of the Green Cross, a medical cannabis dispensary on Market Street between Eighth and Ninth streets. “We’re in a world where you’re competing with all these fly-by-night businesses who don’t have to follow the rules — they’re not regulated.” Until recently, more than half a dozen dispensaries had failed to register their businesses with the San Francisco Department of Public Health.

One of the pioneers of pot advertising was KUSF Radio. Four years ago, the station, run by the University of San Francisco, had a Green Cross-underwritten public-service announcement that ran on 90.3 FM.

But sometimes it’s hard for pot clubs to buy ads; several have lined up ad agreements only to have them retroactively rejected.

In May, Facebook canceled the Green Cross’ existing advertisements on the site. MediCann, a group of clinics specializing in medical marijuana evaluations, also had its Facebook ads snuffed.

In August, the Green Cross paid in full for a slot on a huge electronic billboard on Interstate 280 at the Serramonte Shopping Center in Daly City — only to see it taken down a day later.

The circumstances surrounding that reversal were not quite clear. SF Weekly ran a blog post suggesting the ad was taken down because its content was objectionable. But a spokeswoman for the mall, Cherie Napier, said that the real reason was that the billboard was only permitted to run ads for products or services sold at the mall. The marijuana ad, she said in an e-mail, “would have been a violation and could have resulted in a $10,000 fine from the state.”

Aside from the weeklies, the medical pot business supports a whole genre of “cannabis friendly” magazines, such as West Coast Leaf and Kush.

“We don’t do general newspapers or anything like that,” said Adrian Moore, director of operations at 7 Stars Holistic Healing Center in Richmond.

Bigger news outlets don’t appear ready to take advertisements for marijuana, at least not yet.

To what extent can marijuana be advertised? Kris Hermes, executive director of the Oakland-basedAmericans for Safe Access, called advertising for the drug a First Amendment issue.

“Our rough position is that we’re in favor of patients finding out how to access medical marijuana,” Hermes said. “We encourage local governments to figure out ways of allowing advertisements that aren’t counterproductive to [get to] the members of the community.”