Warning: date(): It is not safe to rely on the system's timezone settings. You are *required* to use the date.timezone setting or the date_default_timezone_set() function. In case you used any of those methods and you are still getting this warning, you most likely misspelled the timezone identifier. We selected the timezone 'UTC' for now, but please set date.timezone to select your timezone. in /home/thcfinder.com/public_html/includes/functions.php on line 98
 Dozen People Arrested In Polk For Selling 'Fake Pot | News Marijuana THC Finder

The products, with names like K2, Cloud Nine, Black Mamba and Kryptonite, are marketed as incense and available in convenience stores, tobacco shops, and on the Internet. It's legal to sell K2 in Florida except within the jurisdiction of Polk County. On Thursday Sheriff Judd held a press conference to announce that his deputies had arrested 12 people for selling K2 or similar products in the Polk County Region. The undercover sting marks the first time in Polk and possibly Florida where people were arrested for hawking the mixture of herbs, spices and other plant material. 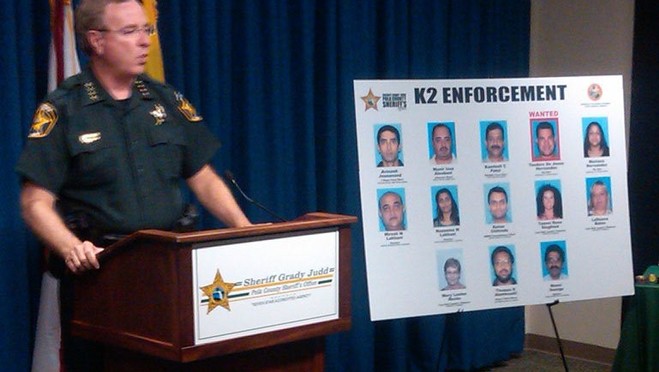 At the press conference Sheriff Judd commented that "The sellers clearly know it is being smoked with the purpose of getting high". Sheriff Judd continued to say that "K2 is not simply some incense. It's not some little flower plant. It's a chemical compound on that flower."

The dried plant matter is sprayed with synthetic cannabinoids before being packaged and sold. The dozen store owners or clerks arrested this week were charged with selling an imitation controlled substance, a third degree felony. Law enforcement agencies typically use that charge to arrest people who, for example, sell baking soda as cocaine. Judd submitted the cases for review before undercover detectives checked stores selling K2. Both agencies agreed selling the products "was a violation of the law," the sheriff said. Prosecutors said they think the charges will hold up in court.