Warning: date(): It is not safe to rely on the system's timezone settings. You are *required* to use the date.timezone setting or the date_default_timezone_set() function. In case you used any of those methods and you are still getting this warning, you most likely misspelled the timezone identifier. We selected the timezone 'UTC' for now, but please set date.timezone to select your timezone. in /home/thcfinder.com/public_html/includes/functions.php on line 98
 Woman Hides Pot in Dirty Diaper | News Marijuana Blog | THC Finder - THC Finder 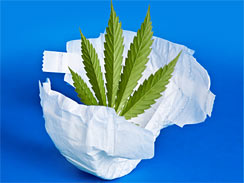 Trooper Stefani Plume had just asked permission to search the car of 23-year-old India Banks, of Clairton, when Banks allegedly handed the diaper to the trooper and asked her to toss it into a bag of garbage inside the vehicle.

Plume says she thought it was odd of Banks to hand over the wet diaper instead of throwing it in the bag herself. So the trooper checked inside and found a small bag of marijuana.

Plume described the Oct. 25 traffic stop when Banks appeared in court Wednesday to waive her right to a preliminary hearing. Banks will enter a special probation program for first time offenders that will enable her record to be expunged if she complies with her probation terms.