Ex-Con Arrested Whilst In Possession of $1.5M In Pot

An ex-con was arrested after cops in Queens stopped him running a red light in the early hours of the morning and found enough marijuana in his car to get half of St. Albans high. Cops said Clement Hunter had more than 500 pounds of pot worth more than $1.5 million packed into the back of a rented white 2010 Dodge Caravan when he was stopped. Hunter had been driving in St. Albans around 4 a.m. when a pair of uniformed officers on patrol in an unmarked car saw the minivan run a red light along Merrick Boulevard and make a right turn without signalling.

The cops made a U-turn to pull him over and Hunter made a break for it. With the cops in pursuit, Hunter sped along for several blocks before turning down a dead end at 178th Street near 132nd Avenue. But he still wasn't done, the bad driving dope deliverer jumped out of the minivan and tried to run away, the cops grabbed him as he tried to scale a fence. Police finally realised why he was trying so desperately to make his great escape when they searched his rented caravan. In the back of the caravan there was roughly 10 bales of marijuana nice placed on top of each other and each weighing roughly 50 pounds.

The pot was tightly wrapped in green plastic and stuffed in black trash bags so that it couldn't be sniffed out. "It was in plain view," a source said. "You can see what it was." Hunter, who lives in Jamaica, was arrested and faces a slew of charges, including 50 counts of felony criminal possession of marijuana in the first degree, reckless endangerment, and criminal possession of stolen property, officials said. Cops said Hunter had four prior arrests, all involving marijuana or other drugs, and two of which included weapons charges.

Army punishes 36 in Alaska for synthetic pot use 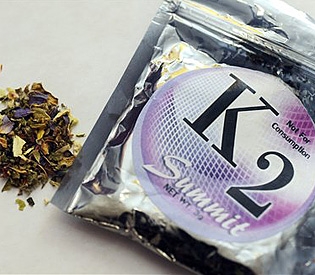 FAIRBANKS, Alaska — The U.S. Army Alaska says it has punished 36 soldiers for the use of synthetic marijuana since it banned the substance.

Synthetic marijuana is known as Spice or K2. It’s a blend of spices and herbs sprayed with a compound similar to the psychoactive ingredient in marijuana. It’s commonly sold in head shops.

Some users think the substance can’t be detected in drugs tests. But the Army says its urine tests can now find the chemicals used in Spice.

In March, a Fort Richardson soldier just back from Iraq was convicted of driving under the influence of Spice. He was arrested after driving over three raised medians, into a concrete wall and down a sidewalk with flat tires and a broken axle.

It had seen an increase in users with high blood pressure and heart rates admitted to hospitals at Fort Wainwright and Fort Richardson.

The soldiers have had life-threatening reactions in some cases, the commander of U.S. Army Alaska, Brig. Gen. Raymond Palumbo, wrote in a commentary published in the Fort Wainwright and Fort Richardson newspapers.

"We have no idea what the long-term effects are since the chemicals vary and have not been fully tested," Palumbo wrote. "But we do know that in the short term, bad things happen when people use Spice."

In October, Alaska legislators introduced a bill to outlaw Spice after state troopers arrested a Fairbanks man who used the substance, broke into a house, stripped naked and slept in the homeowners’ bed. He told troopers God had told him to do so.

Patch reports on law enforcement activity in Geneva, using information provided by official agencies. Persons charged with a crime, or issued a citation for violation of a local ordinance, are presumed innocent until proven guilty in a court of law. If you or a family member are charged with a crime or cited for a violation, and the charge or citation is subsequently adjudicated

Mila Kunis Thinks Miley Cyrus May Have Been Smoking Weed

Mila Kunis isn’t quite buying the story that Miley Cyrus was smoking salvia in the recent bong video and she’s calling her out. As Kunis appeared on George Lopez’s show, she revealed some of her teenage past which led to her being asked about Cyrus’ current situation, “She was smoking some weed. Come on, now; that was not no legal substance,” Kunis openly commented, but didn’t go on to judge her for whatever she may have done.

Do you think Miley Cyrus was smoking salvia or do you think that she was just taking some nice tokes of some marijuana. What you really have to take into consideration is that the side effects that she experienced in the video, most of them are consistent with the side effects caused when smoking salvia but I guess we will never truly know the truth. After all how can the all time star “Hanna Montana” be caught smoking marijuana? 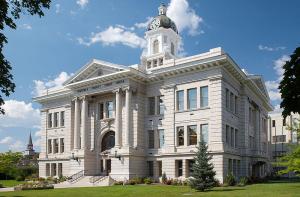 No way would they convict someone of possessing a 16th of an ounce of marijuana, member after member of a Missoula County jury pool told a stunned judge and prosecutor last week. As a result, the Missoulian newspaper reported, the judge in the case ordered a recess, and a plea bargain was reached in a drug trafficking case against Touray Cornell.

Potential jurors repeatedly told the court they would not convict for a couple of buds found during a raid on Cornell's home in April. One juror wondered out loud why the county was wasting time and money prosecuting the case at all, especially in a locale that approved a 2004 initiative making marijuana possession offenses the lowest law enforcement priority.

After that juror questioned the prosecution, District Judge Dusty Deschamps polled the jury pool and found at least five others who agreed. That was in addition to two others who had already been excused because of their philosophical objections to pot prosecutions.

"I thought, 'Geez, I don't know if we can seat a jury,'" Deschamps said, explaining why he called a recess.

Instead, Deputy District Attorney Andrew Paul and defense attorney Martin Ellison worked out a plea agreement on the more serious drug trafficking charge. Cornell entered an Alford plea, in which he did not admit guilt. He was then sentenced to 20 years in prison with 19 suspended. Since Cornell has already served 200 days awaiting trial, he should be out in a matter of months.

"Public opinion, as revealed by the reaction of a substantial portion of the members of the jury called to try the charges on Dec. 16, 2010, is not supportive of the state's marijuana law and appeared to prevent any conviction from being obtained simply because an unbiased jury did not appear available under any circumstances," according to the plea memorandum filed by his attorney.

It was "a mutiny" by the jury pool, said Paul.

"I think it's going to become increasingly difficult to seat a jury in marijuana cases, at least the ones involving a small amount," Deschamps said.

Noting changing attitudes toward marijuana, as evidenced by the Missoula initiative and voters' approval of the state's medical marijuana law, Deschamps wondered if it were fair to insist on impaneling a jury that consisted only of "hardliners" who object to all drug use. "I think that poses a real challenge in proceeding," he said. "Are we really seating a jury of their peers if we just leave people on who are militant on the subject?"

"I think that's outstanding," John Masterson, who heads Montana NORML, said when told of the incident. "The American populace over the last 10 years or so has begun to believe in a majority that assigning criminal penalties for the personal possession of marijuana is an unjust and a stupid use of government resources."

Deputy DA Paul said that normally a case involving such a small amount of pot wouldn’t have gone that far through the court system, but for the felony charge involved. But the response of the jury pool "is going to be something we're going to have to consider" in future cases, he said.

A disabled farmer who took a potshot at a fox described yesterday how his house was stormed by armed police after he unwittingly hit two burglars. Edward Tibbs aged 63 went out on his mobility scooter in the dead of night when he heard his geese becoming distressed. After spotting the fox and firing at it, he returned to his home at Elm Farm in Crays Hill near Basildon in Essex, and went to bed. It was only when 16 armed officers arrived hours later as a police helicopter hovered above his property that he learned two people had been treated at hospital for gunshot wounds to their backs and legs. 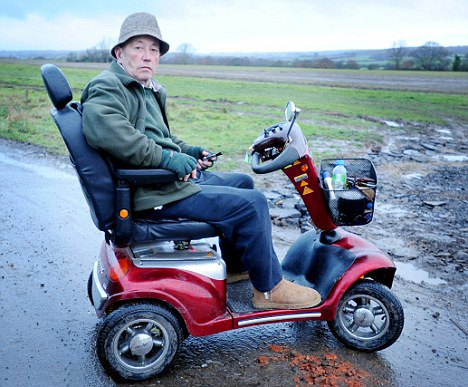 The case echoes that of Norfolk farmer Tony Martin, who shot and killed an intruder at his farmhouse 11 years ago. But Mr Tibbs, who has been married to wife Jacky for 42 years, yesterday insisted the incident had been an accident. ‘I was shattered when the police told me what was happening,’ he said. ‘They closed my business down for a day or so and took all my stuff away, including my clothes and all my money too. ‘I was bailed and had this hanging over me. It was a great relief when they phoned and told us the charges were being dropped.’

Mr Tibbs complained he was now without his shotguns after police withdrew his firearms licence. He said: ‘Shooting is my life. I used to shoot every other day – rats, foxes, pigeons, vermin.’ During the police investigation it emerged that, unknown to Mr Tibbs, a cannabis factory had been set up in an outbuilding he was renting to tenants on his 650-acre farm. Firearms were also found in the outbuilding.