Marijuana plants worth almost $1m were found in a home in Hornsby this morning along with a carpet python and several other animals allowed to live in disgusting conditions. Police officers arrived in Noble St at 7.30 in the morning where they found 185 cannabis plants being grown in a make shift hydroponic facility under a dilapidated home. They also found an amount of dry cannabis but the plants themselves are estimated by police to be worth roughly $925,000 street value. 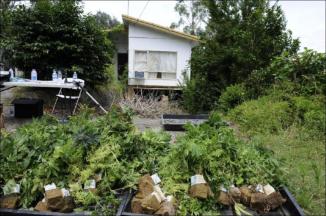 Hornsby Council have also condemned the house which police said was covered in faeces from dogs and cats left to live in appalling conditions. Energy Australia attended and will prosecute the owner for bypassing the electrical grid to steal electricity.

The house at the end of a small cul-de-sac was run down and overgrown but had Christmas lights erected. A large amount of music equipment was piled up inside the open garage. It is thought the owner had been working as a DJ. A 24-year-old man will face Hornsby Local Court later today charged with cultivating a commercial amount of cannabis and supplying a prohibited drug. 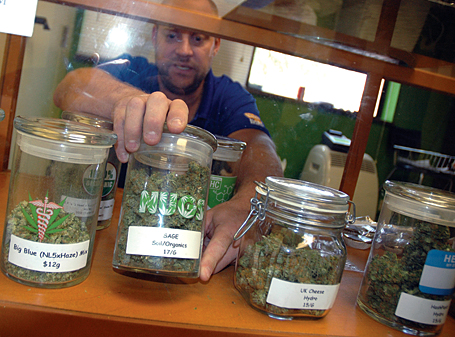 Dude, you're not in Colorado anymore.

So you can put your license for legal marijuana away. Because that stopped being legal, oh, about the time you passed Julesburg and crossed the Nebraska border.

A gap in Colorado law is allowing growers to produce far more medical marijuana than patients can legally possess. And some of the surplus is finding its way into Nebraska.

It's showing up during traffic stops, in drug busts and in cases a prosecutor won't yet discuss. And while it's not pouring over the border, there is enough for law officers to take notice.

"It's not like it's a tidal wave, but it's here and there based on reports I received from officers assigned to the drug task force," Moreno said.

Colorado is making national news for its efforts to regulate the production of medical marijuana, considering, for instance, whether the pot's potency should be tested and labeled. It's also considering standards for pesticide use and rules for organic labeling.

But none of that addresses the legal loophole leading to surplus supplies of medical marijuana.

Licensed patients -- and there were more than 90,000 of them this summer, according to the state of Colorado -- are allowed to have 2 ounces of usable marijuana and up to three mature plants.

The problem? A single mature plant can produce up to a pound of usable marijuana under ideal conditions, according to Colorado's I-News Network.

And even if each plant produced just 3 to 8 ounces, the statewide surplus could reach 64 tons.

Which has to go somewhere.

So why not Nebraska's Panhandle?

Officers are finding it on the highway, too.

"They'll have a card that says they can possess it in Colorado," said Lt. Lance Rogers of the Nebraska State Patrol. "But we don't have that law, so we cite them. Does it happen on a regular basis? Sure."

And by regular basis, he said, he means sometimes once a week, sometimes twice a month.

Because of the small amounts, his troopers typically seize the pot, write a ticket and send drivers on their way.

"They're not smugglers," Rogers said. "It's mainly for personal use."

And in at least one case, it might not be the higher grade medical marijuana at all.

In July, investigators searched a Scottsbluff trailer and found more than 100 Ecstasy tablets, a bag of illegal mushrooms and several bags of marijuana in so-called smelly-proof bags, according to court documents.

But the prosecutor wasn't so sure. One of the bags was simply labeled "medical" with a black Sharpie.

Spanish Cannabis Club May Have A Hard Future

A Spanish club that allows members to smoke marijuana joints has opened in Madrid, but its future is uncertain due to imminent anti-smoking laws. The Private Cannabis Club opened last month within a Madrid bar and restaurant and is run by an association that argues it is within the bounds of a law that allows consumption of cannabis if it is in private. 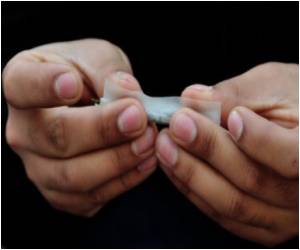 “We do not allow the public in, it is strictly a private association so we only allow in members,” Spokeswoman Alicia Mendez said from the club located near the Spanish airport. She continued to say that “We do not sell drugs nor do we promote the consumption of drugs. We are simply a place where people with a shared interest meet.”

Personal consumption of marijuana in private was legal, however, mendez said, and members were allowed to do so inside the private club, which had been registered as an association. “The consumption of cannabis is not only for recreational but also therapeutic,” she said. So this is just one step closer to true legalization as all we can do is wait to see what the Spanish authorities to if they even do anything.